Upon first glance, you wouldn’t expect Mianna Wick of Delta, CO to be a totally kick ass Indy Car driver, but in the short time she has been competing she has proven herself as one of this sport’s up and coming superstars, securing sponsorships and even a magazine cover! All eyes on her as she tries to fulfill her 2018 goal of driving in IndyLights and getting picked up by a Verizon Indy Car team.

Mianna is our newest Racechick.com brand ambassador and I wanted to get to know and share more about her life behind the wheel! Read on to see how she's making it happen and why she got married at a racetrack! How long have you been competitively driving?

I have been racing since 2010, driving since 2006. My dad used to race motocross so he knew all about the racing world. After traveling around for a few years, my family and I were looking for a hobby we could do. So we built a gokart! We knocked around in that for a little while, than decided to take karting more serious. We ended up building a kart track in our back yard and bought the karts to match. I remember spending hours out there, running my kart out of gas during a session because I didn’t want to come in, pushing myself. That's when we decided to start entering me into some races.

My first race was a local club event in Grand Junction, CO. I remember being nervous because everyone was watching to see how I’d do and I didn’t even know what “grid” was! I ended up taking first in my class that day - don’t ask me how I pulled that one off because I don’t know! ;) It's been a great experience. There has been some good teaching trials, but I wouldn’t have it any other way. My dad always used to tell me to play the cards I was dealt. God made me a woman who is passionate about racing and I don’t intend to wish I had a different hand of cards. There is about 50% of people who LOVE that I am a woman pursuing my dreams, and then there are about 50% of people who don’t believe I should be driving.

You know though, that’s the beauty in racing - All of us drivers are out there battling for the same goal under the same circumstances and the fans get to pick which driver they think has what it takes and why they like them. It wouldn’t be racing without the fans. Fans being passionate about the driver they choose is why the sport thrives. We heard that you got married at Pikes Peak International Raceway (which happens to be one of our favorites)…what was that like? Getting married at the race track was a true gift! I never thought the owners would allow that to happen, but they did! There is a lot more to me than racing so I thought about how other venues would be nice, but what made the final decision for me was that marriage is about starting a life together. My life has SO much to do with racing right now. It is a love of mine and a passion. We (my hubby and I) also loved how getting married on the start/finish line symbolized us starting our life together and how we will someday be finishing life still together. What is it like to find a team and sponsorships? What would you tell other girls who are trying to come up through the ranks to do those things? It’s absolutely amazing! Having a team and sponsorships
creates this relationship between the two parties that is very special.
Being sponsored by someone and being on someone’s team means your
both standing hand-in-hand pushing for the same goals in a very
difficult sport. It becomes a relationship because of the value obtained
between both.

As for the advice I’d give is to never get “stuck” in a
series or division too long. There are not “rules” in how to make it in
racing. My advice would be to learn as much as you can in the levels
your practicing (karts, FF1600, Formula Mazda… ETC), but be able to
recognize when your ready to move on and find a way to do so. I’d
also advise to look at racing as your full time “job”. Getting to drive
cars is the bonus check - not the full job title. There is SO much more
that goes into making it than just driving well. You have to learn how
to market yourself, learn what current companies are looking for,
network with those companies and potential teams/series, fans. It’s
everything. You have quite an impressive racing resume. What do you consider some of your 'highlights'? • Debuted as highlighted athlete at many events, including one of the top 10 events in the world

• The selected driver of David Hoffpauir to drive for his team, Loophole Racing

• Ran in a field of 72 drivers in the SKUSA National series, S2 What do you hope to accomplish in 2018 and beyond?

I HOPE to attain driving in IndyLights for 2018. I don’t know what my future holds right now, but that is my hope and goal! Beyond that all I have left is my final goal (my dream). That is being able to drive for the Verizon IndyCar series for the full series. Is there anything else you would like to add?

I just like to add in all my interviews my love for Christ. It is seriously the most important thing to me! Being able to impact people for His kingdom while racing is such a gift that I’ll cherish forever no matter how far I make it.

Where can people find you?

People can even find what I do for my workouts and health routines on Insta and Facebook at Mianna Wick Fitness! =D Everything I have gotten including these shoes have been comfortable & great fitting! Hard to find as a female in the motorsports world but RaceChick always does it! Love them!

Great fit even though not custom made. Flexibility and comfort rates the Chequered flag 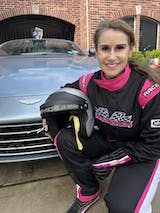 This jacket is awesome! It fits super nicely and doesn’t feel suffocating. The colors are awesome. Would definitely recommend to anyone looking for a race jacket.

Can’t wait to wear these to the track. I knocked a star off just because they’re a little baggy and long. I’m 5,4 and 110 lbs, and ordered an XS. I also thought they were black, but they’re grey. Either way, I still love them, and will order more from this brand.

Car Girls are the Best Kind of Girls Tee Shirt